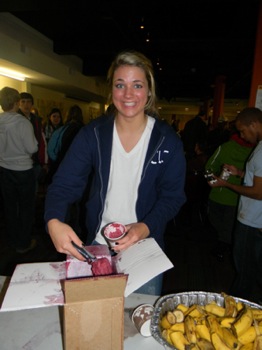 Before the newest country South Sudan was established, there were lots of concerns about violence, even genocide in the end of 2010. I preached urgent need of action and encouraged students to join me. After the mass, two students came forward to advocating a peaceful vote for the country. One of them was Jacqueline with whom we developed action plans and invited speakers from CRS and another university. The prayer vigil took place in December with the engaging forum and the participants walked to St. Francis Chapel in the midst of snowstorm. It was a moving experience to see the candles walking in line as a sign of solidarity with our brothers and sisters in Sudan. Jacqueline was there.

Soon after she left for Rwanda as a JCU’s immersion experience. She came back as a different person. I knew what it meant to be changed by being a friend of the poor in Africa because I have friends in Madagascar, Uganda and Kenya. Her experience in Rwanda must be something that pushed her to feel uneasy and challenged.

Then she joined the Living Person 7. She never ran a long distance, but decided to run a full marathon, which seemed insane or courageous. She trained with John Ropar for long distances every Sunday. She had become a runner who knew what it meant to commit to something bigger than herself. She was persistent that all mattered. After her first and unforgettable full marathon, she thanked me to push her to get through the preparation. I thanked her as well for her perseverance for the good cause.

Now Jacqueline is away because she wanted to keep her promise to go back to Rwanda for the summer. I understand what pushed her to go back to Africa. It is something no one would understand unless you go to Africa and make friends there. I dream of what Jacqueline can be for the future, which will make me appreciate again for being men and women for others.

Jacqueline is the twenty-fifth Christ.