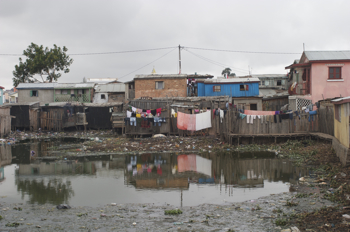 Antananarivo is the capital of Madagascar, meaning the thousand villages. I am back in this primitive city since I visited in 2005 as a member of CRS. Nothing seems to change. One big difference might be that I am no longer a seminarain but a priest.

The expreience that I had in Madagascar has lived with me. It has guided me to discern what kind of priest I want to be throughout the seminary formation. Poverty and solidarity have taken flesh in my priesthood, and I have run several marathons with that flesh in the name of Living Person that comes from St. Irenaeus’ words—The glory of God is the living person.

Nevertheless, the first place I visit makes me numb. Br. Emmanuel takes me to one of his schools that the Missionary of Charity provides education and food. I have been supporting this place last four years through partaking in marathons and raising money from it as the Living Person. Br. Emmanuel stops in the middle of the road and parks the car alongside it. He says we have to walk. Once we enter into small huts, disgusting smell overwhelms because garbages pile up everywhere. Water looks like a crude chemical-thick, dark and black. It turns out an edge of the humongous slum in Antananarivo. Children are running around with running noses; women washing laundries in the middle of an abandoned railway. Besides the fact that the slum has a terrible condition to live, people seem to live normal life because there are houses built with bricks and small shops selling food and necessities. The school is in the heart of the slum.

Many students come to the school for food they get for lunch, Br. Emmanuel says. Many do not have shoes and only dirty clothes on. The small rooms are packed with children and disgusting smell prevails. Needless to say, sanitation is nothing to consider. I recall the pictures that Br. Emmanuel sent to me after I wired the fund that the Living Person raised through running marathons. It was taken in this tiny school rooms and the yard. Actually I have brought frizbees for the children and yet it does not look like possible to throw frizbees in this tiny place. If I were to be here, I would be miserable.

However, these children never show negative emotions. Smiles are everywhere and life seems full which amazes me. I cannot take a picture of poverty unless I shot the dirty streets, shoes and houses. Whenever I put the camera to the children, their faces become like blooming flowers. It seems for them not to matter living in the slum. It maybe a concern for

those who come from affluent countries like United States and Western Europes. As long as we provide food for children, they will come to the school. It does not matter what motivation they have. What matters is that they come to the school and eat daily bread, and take time to hope that they can get out of this place sooner or later. It is a temporary stop to dream that the better come later.