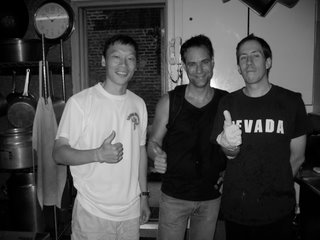 April 17
I was excited to receive a letter from Mr. Matt Vogel who is working at St. Joe’s house in Manhattan. He seems to be in charge of the place. He wrote the three-full-page handwriting letter. He responded to my question that what they basically did in the Catholic Worker. It seems to me that the schedule is full of engagement with the poor and the people in the community. I like that we have our own leisure and discussion time, and we have a daily Mass, too. Their bible study is now on Leviticus, wow! Matt said that they are quite flexible, so when I come there, we can talk about what I can do. I really agree to his idea that the best way to learn about the Worker is to participate in their life and work, and to get to know people, which happens very easily when working alongside people. I think that I have a good supervisor who is able to see things from the perspective of the supervisee. God bless the community.

May 8, 2006
The Living Man who are to run the marathon for the orphans and the homeless in Madagascar collected the four donation boxes that displayed for a week. There were both some expectations and some anxieties together, when we gathered to open it. With gratitude, we prayed first for those who supported us in many ways. After opening the boxes, I realized again the truth that Robert Reich said: “Individuals comprising a society will sacrifice their personal well-being to the greater good only if they feel connected to that greater good in some substantial way.”

May 19, raining whole day
Since the summer break started, I began reading the autobiography of Dorothy Day, “The Long Loneliness.” In the book, I have met not only Dorothy Day but Peter Maurin whose ideas fascinated me as they dominated the rest of Dorothy Day’s life.
“Peter rejoiced to see men do great things and dream great dreams. He wanted them to stretch out their arms to their brothers, because he knew that the surest way to find God, to find the good, was through one’s brothers. Peter wanted this striving to result in a better physical life in which all men would be able to fulfill themselves, develop their capacities for love and worship, expressed in all the arts. He wanted them to be able to produce what was needed in the way of homes, food, clothing, so that there was enough of these necessities for everyone. A synthesis of “cult, culture and cultivation,” he called it, as he tried to give me the long view, the vision” (The Long Loneliness, 171).
He was a man of vision, enthusiasm, and optimism.
He said to Day who asked, “But where do we get the money?”, “In the history of the saints, capital was raised by prayer. God sends you what you need when you need it. You will be able to ay the printer. Just read the lives of the saints” (173)
He himself was a peasant, worker, teacher, propagandist, and green revolutionist.
He said, “Eat what you raise and raise what you eat” (176). How true it is that charity is personal and charity is love (179).
His social idea came from his own sacrificial life style: “We were ready to endure wrongs patiently for ourselves but we were not going to be meek for others, enduring their wrongs patiently (181). I love his view on a group and an organization: “We are not an organization, we are an organism” (182). I would like to love Peter Maurin dearly, the man of integrity, who not only tried to change the world, but to live in it as it was (191).

May 24 sunny day
After eight hours driving, I was rescued by Eugene who came out to pick me up in an Exxon gas station. I was lost in Manhattan for a while. Eugene is quite jovial and energetic as he talks. Everything is informal here. I was surprised to see a little sign of the Catholic Worker. I might expect to see the big sign decorated with several colors or a neon sign that can be distinguished from others. I am sure that I never find the Catholic Worker by myself. I met several men at the kitchen: Whisker whose name was given by Dorothy Day, Muhammad who is a Muslim and has been at the Catholic Worker about three months, Bred who played a cross puzzle by himself, Japanese called Kole, Roger who came later and started preparing soup, Wallace and two women—Theresa and Marie. I want to talk about Carmen who is the youngest I had met at the Catholic Worker today. He looks at the age of thirties. One of the surprising things was that he mentioned Kim Gi-Ha, a Catholic writer, worker, and propagandist. How amazing to hear one of the Korean Catholic leaders in labor movement! Carmen seemed interesting to talk about him more.
I am in a smoky room in the Catholic Worker because someone maybe cooked the outside room. The building looks very old and smelly. The residents occupy small part of the building. I am so tired after the long driving, filled with much anticipation that will take place tomorrow. I need to go to bed for tomorrow.