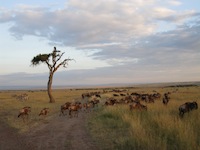 When I was a child, I used to watch a TV program called “The kingdom of animals.” It was all about animals of the prairies in Africa. Lion’s hunting, elephant’s elegant walking, thousands of hooves’ migration caught my eyes all the time. Safari was my utopia where I longed for.

Masai Mara means Masai’s river and it is now the best national park in Kenya. On June 21, I found myself standing up over the roof of a 4WD van in Masai Mara. The prairie’s wind widly blew and the scenary was exactly the same that I saw in the kingdom of animals. Can you imagine how excited I was? When we stopped to look at a lion lying down like a king, my heart started beating. When we saw a family of lions eating bloody ribs of an animal, my mind was blown away. Zebra’s black and white stripes were vivid; hooves under a tree in the pararie were gorgeous; hienas and boers looked comfortable at home. On the way back, the sunset was spellbind. I lost myself in where life was so natural and full.

On the next day, we woke up early and drove out to where no one person was around. A lone elephant was walking so meditatively and it was perfect with a solitary tree in the prairie. After another risky night, all animals welcomed another day with new beats and sounds. When we saw a huge dust coming, we were astonished at watching thousands of hooves move to the north. It was fantastic.

When we left Masai Mara, we stopped by a village of Masai. The Masai worriors welcomed us with a traditional dance. They jumped and made a high-tone sound like wolfs. I jumped with them. Later I heard that those who jump higher than others can get a wife. It is a sign of strength. After the welcoming dance, we entered the village where the cow’s puffs were everywhere. It was one fourth size of a football field and sorrounded by the huts that were built by the cow’s puffs as well. We stood before the welcoming Masai women. They shyly danced and sang. Masai’s house was very low and small. It had a tiny place to cook and two sects of beds for parents and children. Outside the house, the Masais showed how to make fire, using woods. They spinned a soft stick on a hard wood repeatly and then smokes came out.

A Masai put straws near it and fire immediately started which seemed to me a magic. I said some words they spoke. They smiled and said other words that I pronounced again. We laughed together. We wandred the village and looked around their art crafts that I didn’t care much. The Masai were my only interest. I asked questions and some answered in English. They said they watched the World Cup by paying a dollar per person to people who came and set a TV screen for them. How can you imagine the Masais gather around the big screen and cheered the World Cup?

What most surprised me was their gentle spirit. They didn’t scare me. We laughed together, pulling around one another. They gently grabbed our shoulders when pictures were taken. They received us not as strangers but friends. We felt comfortable to walk, talk and take pictures. Some women looked afraid to be taken pictures, so I asked every time to shot. They looked satisfied as they were. The farewell was heartfelt. Although it was a short time, I felt close to them and they seemed as well. The time in the Masai village was strangely emotional to me.