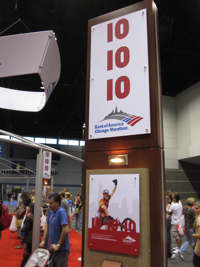 On October 10, 2010, I ran the Chicago Marathon, one of the major marathons in the world. It has been inspiring many through 10-10-10 advertisement. To me, Chicago is my last major marathon in US after Boston and New York in 2009. On Saturday, I flew to Chicago and found myself in the starting line on the Sunday early morning. The crowds thunderingly cheered at 7:30am as the runners ran forward to the city. I have never been to Chicago that has many gourmet restaurants, historical places and political power-Mr. Obama. Somehow, Chicago becomes Japan the country that I have never been although I have traveled almost 30 countries around the world. It is very close and yet heart feels distance.

Running through the city with big spectators is always fun. I immersed myself to the spirit of human waves, enjoying different faces of Chicago. Since I was in the corral A, I ran out with fast runners and made my first mile under 7 minutes. I was happy to have a strong start. I kept a under-7-minute pace and passed the half (13.1 miles) in the time of 1:30:08. If I had kept the pace, I would have made sub-three that has been my ultimate goal to achieve. A pacemaker holding a 3:00 picket was running with me. I felt good and was able to keep the pace until 21 miles where I felt exhaustion and heat. The temperature went up quickly and the sun started blazing. I significantly slowed down after 21 miles, feeling pain on my left foot. Nevertheless, I had to keep going, saying to me, “Use your arms; breathe, breathe!” It is the fundamental that made me not to be lost along the way. Knowing that I could or needed to stop at any point was a scary thought, so my baby step-one step at a time-with using arms and taking breath was critical.

I knew that I could break my personal record (3:07:35) in Boston 2009 if I stayed on. It was a long five miles in which I practiced the basic over and over. I prayed and listened to the song, pushing myself one step by one step. Running closer to the finish line, I saw thousand spectators disappeared and I ran in a quiet slow motion. I passed the line and made the sign of the cross. The race was over: 3:05:26. The baby step with the fundamental won. It was a happy moment to see the time that I have spent two years to reduce only two minutes. But it was worth.

In the city of fever, I feel the spirit of runners and spectators with the heat. At the same time, my fever for the greater race grows ever more.