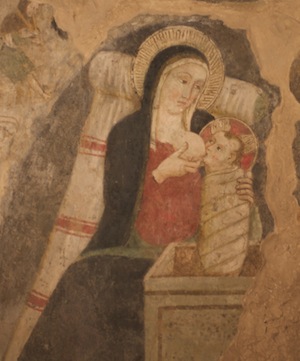 When St. Francis came back from Jerusalem, he wanted to make the scenes of Bethlehem visible for those who had never been to the holy land. So he created the first Nativity Scene on Christmas night in Greccio in 1223.

Greccio is a small rural town an hour and half away from Rome. With two brother priests on the fourth Advent Sunday, we made pilgrimage to Greccio. St. Francis stayed there until he moved to die in Assisi. When we arrived at noon, the bells were ringing and calling all to the Eucharistic banquet. We felt blessed to be a perfect timing to attend the Sunday liturgy. As we participated in the mass, we realized that we were surrounded by the nativity scenes coming from the different countires in the world.

Greccio reminded me of Eremo, St. Franics’ hermitage in Assisi, because it was built on the rock mountain. St. Francis dug into the rock and stayed in the cave, praising God and looking down the town. Tranquility and simplicity were there. St. Francis’ dormitory made me amazed because it is a tiny cell made up of uneven rocks. He never lost the spirit of poverty.

After walking through the small and wooden chapel of San Francesco and the dormitory of the friers, we arrived at the holy place. The picture of John Paul 2 who visited there in 1983 was welcoming us. The chapel of Nativity Scene was small and yet charming. In the small cave, there was a painting on the rock and an altar setting against the rock. The painting was

colorful and the figures were fascinating. Above all, one image was striking. I have never seen a bald expression of the Blessed Virgin Mary brestfeeding the baby Jesus. The mother’s bosom is so real and vivid that I feel that I would like to be the one to be fed. The image shows that her body nurtures the Son of God as well as the children of all human beings. I could only imagine how the people who first saw the nativity and the painting were happy to be with the sacred image, which resonates all human hearts around the world in the season of Christmas.

Outside the chapel, the gorgeous and peaceful view captured my mind. I stood by St. Francisco who was lovely looking down the world and blessing it in his singing. The canticle of the sun was playing in my heart.

Most high, all powerful, all good Lord!

All praise is yours, all glory, all honor, and all blessing.

To you, alone, Most High, do they belong.

No mortal lips are worthy to pronounce your name.

Be praised, my Lord, through all your creatures, especially through my lord Brother Sun, who brings the day; and you give light through him. And he is beautiful and radiant in all his splendor! Of you, Most High, he bears the likeness…